Pond: Mere, Rune and Flint, an exhibition of Selborne artist Mary Waltham’s paintings, photographs and drawings, inspired by the area’s ponds, opened on the 10th September 2019 and will close of the 17th November. 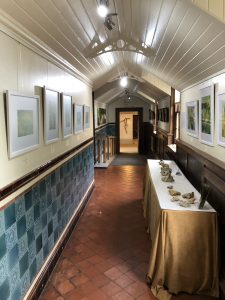 Mary’s work as an environmental artist responds to the mystery, history and quiet beauty of the ancient ponds around Selborne, Hampshire. Ponds are a common feature of the British landscape, and in early human settlements were a shared water resource for humans and animals. Ponds were essential on areas of common land used for grazing livestock. Human activity has led to the loss of ponds in Britain. The rich and diverse ecosystem that relies on each small pond is increasingly threatened by drought conditions such as occurred in the summer of 2018 in Southern England. 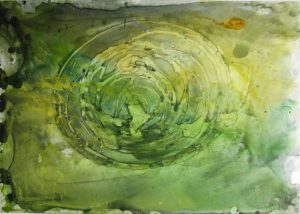 One Saxon pond – Wood Pond on Selborne Common – virtually dried up. What would Saxon farmers who relied on this pond for their livestock have done in such circumstances? How are we addressing droughts and floods in the 21st century?

Wood Pond is on top of Selborne hanger, it is not fed by any other source of water and is man-made. However it appears to been a part of the Selborne landscape for many centuries.

‘The importance of ponds as drinking places for livestock depastured on Selborne Common is recorded from the 13th Century (Macray 1891, 52), therefore it is reasonable to suggest a Saxon or medieval construction date for the dewpond (Wood Pond).’

Documents relating to Selborne Priory in 1250, note that those who had livestock in Selborne Wood had free drinking rights at the great mere (maram). Much later in the 18th century when Gilbert White was recording Selborne he wrote

‘Now we have many such little round ponds in this district; and one in particular on our sheep down, three hundred feet above my house ; which though never more than three feet deep in the middle, and not more than thirty feet in diameter and… containing not more then three hundred hogsheads of water, yet never is known to fail, though it affords drink for three hundred sheep, and for at least twenty large cattle beside.’

And so Wood Pond provided water for Selborne’s livestock for another 250 years, until 2018, when it did fail. The three month long drought and high temperatures, saw the pond decrease in size daily until it was nothing more than a boggy patch of ground. Mary who divides her time between the US and Selborne became inspired by the pond and started to document it through her art. Luckily the rains came and Wood Pond is still with us, but with the threat of climate change, it is only a matter of time before a land mark that has been part of Selborne landscape for a thousand years dries up completely. 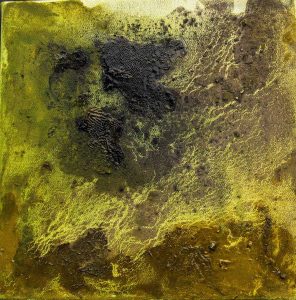 Mere is an  Old English word meaning a body of water. It is from the Proto-Germanic  *mari (source also of Old Norse marr, Old Saxon meri “sea,”. It is commonly used in English place names such as Grasmere or Windermere. More locally at Newton Valence you have Bosmere a larger pond to Wood Pond in Selborne. 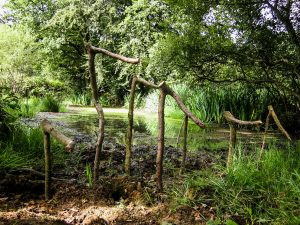 When Mary was documenting the drying up of wood pond she thought about what the Saxons might have done in a similar situation? A drought like the one in 2018, could have deadly circumstances for the residents of Selborne. She thought about how pre-Christian cultures would have sent a message to the spirits. Runes are letters in an alphbet used before the Roman alphabet was adopted in Britain. The Anglo-Saxon rune for water is Lagusz. Mary created a number of Lagusz-like forms from the wood and installed them around the pond. The next day it rained and within two days Wood Pond began to once again fill.

‘It was believed in many cultures across the world (inluding the Anglo Saxons in Britian) that bodies of water in the form of wells, lakes and ponds might provide access to another world below that of man, a world inhabited by both spirits and ancestors.’ 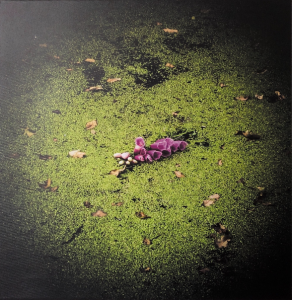 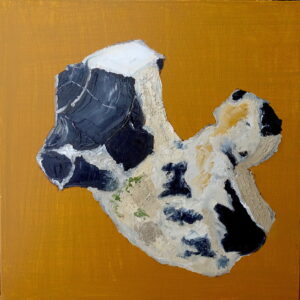 Ancient ponds such as Wood Pond, are lined with clay and flint.

‘A final coating of stones or other hard material (such as flint) is added, to preserve the clay from injury by too deep peneration of the feet of the cattle using the pond.’

Life in the Pond 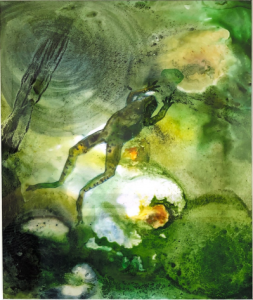 Ponds are teeming with life! But did you know that the Spangled Water Beetle can only be found in the ponds in nearby Woolmer?

Your ticket for the: Pond: Mere, Rune, Flint