Rosemary Irwin continues her log of the Friend’s of Gilbert White & The Oates Collections walk.

WALKING IN THE FOOTSTEPS OF GILBERT WHITE FROM SELBORNE TO RINGMER

The second weekend of our walk to Ringmer has taken place, the route being from Heyshott, south of Midhurst, via Bury and Washington, to Tottington Manor, Edburton, which is near Steyning. The route has gone through some of the prettiest villages in the county and country, including Heyshott itself, Graffham, Sutton and Amberley, and through the grounds of Parham House. We have traversed the Arun and the Adur rivers, the former, without its ferry any more, necessitated a hike down the river to the bridge and up again the other side, all within view of beautiful smarshes and the rolling South Downs. Lunches have been eaten at lovely Duncton Mill, under the trees at Parham and at the wonderful Norman church in Steyning, and days have started and ended in the graveyard at Washington, and more prosaically in the car parks at The Squire and Horse at Bury and at Tottington Manor. But what people are really interested in at the end of the walk is the cakes, and St Peter’s Church in Marlborough provided a spectacular coffee cake on Day 5, hand delivered by the Marlborough contingent, and a perfect Victoria sponge from a Friend. 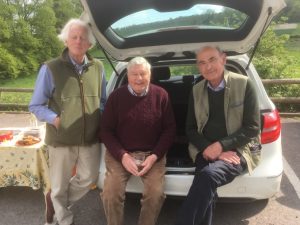 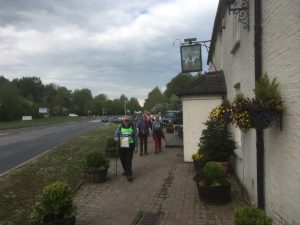 Day 4 Heyshott to Bury – waiting for tea, and the group arriving to consume it at the Squire and Horse in Bury. The pub sign looks curiously like Gilbert White on Mouse. 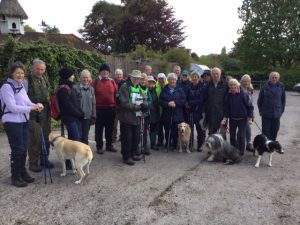 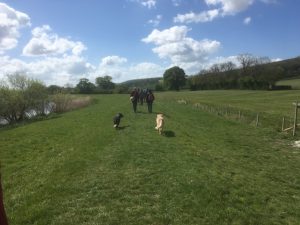 Day 5 Bury to Washington. The start at the Squire and Horse pub, walking beside the Arun and, below, failing to negotiate a stile in proper order and wisteria in Amberley. 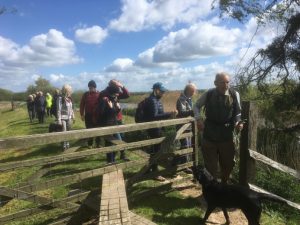 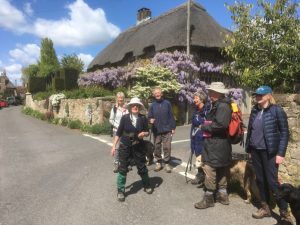 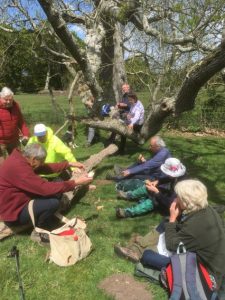 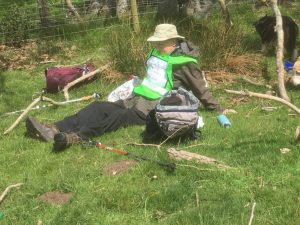 Lunch at Parham under an ash tree which was just emerging from its winter sleep. Our leader took a few moments to snooze while the strains of high office were temporarily in abeyance. 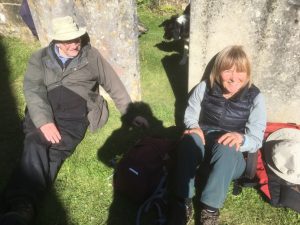 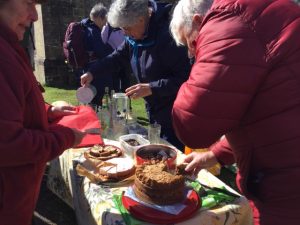 Later , after lunch in the grounds of Parham, the group arrived in Washington, where gravestones provided a welcome respite from walking, for our leader and back marker. The cake from St Peter’s Marlborough was only slightly consumed when this photo was taken, but it didn’t last long! 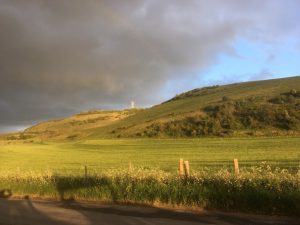 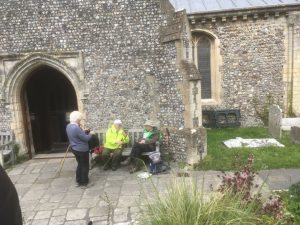 On Day 6 we walked under Chanctonbury Ring and lunched at Steyning Church, which has a spectacular Norman interior, and afterwards reached Tottington Manor where to South Downs towered above us, themselves dwarfed by ominous black clouds, which mercifully held onto their rain. We had the doubtful privilege of my 5 and 7 year old grandsons with us, but with some pauses, 7 year old Arthur managed the whole way. Delays were frequent until their parents decided they should do their own thing, and their style of walking can be seen below. 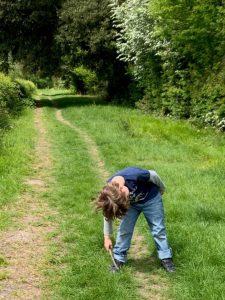 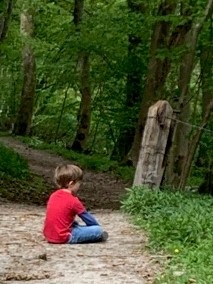 More proof that Gilbert made the journey from Selborne and Ringmer came at Duncton Mill this last weekend, where the owner knew of field crickets nearby being mentioned in his diaries. I am pursuing the research. He went to see his aunt, Rebecca Snooke, who lived at Delves House in Ringmer (still there under the guise of an old people’s home). She was a widow, whose husband had given her a tortoise called Timothy, and when she died Gilbert brought him, greatly protesting at the bumpy ride, back to Selborne to live with him. He gets many mentions in Gilbert’s diaries and letters, with stories of sorties into the meadow after amorous females, weighings, near-drownings. After his death he was found to be a female, and her skeleton is now on show in the Natural History Museum.

Your ticket for the: THE TORTOISE WALK: Leg 2