Rosemary Irwin tells us about eh final leg of the sponsored walk from Selborne to Ringmer.

Many of you joined us and many others were kind enough to sponsor us to walk to Ringmer, in East Sussex, in pursuit of Gilbert’s route from The Wakes, his house in Selborne, to Ringmer, where his aunt Rebecca Snooke lived. Rebecca Snooke was the original owner of Timothy, Gilbert’s tortoise. Gilbert made this journey a number of times, and recorded the wildlife he saw en route, and we were keen to commemorate his journey, and to raise some money to pay for a sculpture of Gilbert to be installed in his garden on the 300th anniversary of his birth, next year.

The whole route had been reconnoitred by Joanna Selborne, Lizzie Holmes, Selina Geddes, Bryan Oates and David Whitehouse, and I, over 3 years, and proved to be such a stunning journey that it had to be put to good use in memory of Gilbert White. So the walk started from the meadow at Gilbert White’s House, which was covered with buttercups and dandelions, with ‘Gilbert White’ himself to see us off on ‘Mouse’, his faithful pony. 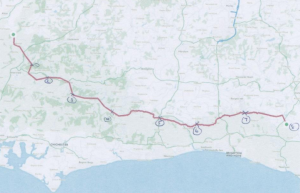 This map gives you an idea of where we walked, in the lea of the South Downs the whole way, from the Western Weald hangers at Selborne, across the heathlands of Midhurst, through the glorious villages of West Sussex, and the back streets of pretty towns like Steyning as we neared our destination. Heyshott, Bury, Amberley, Clayton, Ditchling and Streat were particularly attractive, and we also walked through the grounds of Parham House, and past innumerable wonderful churches which reminded us of how tremendously wealthy this part of the country must have been in Norman and Plantagenet times. We
crossed the Arun and Adur rivers. The ferryman at Bury (where John Galsworthy lived) had long ago given up ferrying people across the river, and so we had to walk a mile down one side, cross via the South Downs Way bridge, and a mile up the other before we could resume our route to Amberley and its castle.

Lunches loomed large in the list of priorities, and we aimed for churchyards where we could find them at the right time, which provided seats and sometimes loos.

Lunch on Day 1 at West Liss, amongst the bluebells on Day 2 and in the grounds of Parham House on Day 5.

Day 6 at the marvellous Norman church in Steyning, and possibly our most comfortable lunch location in Newtimber Church on Day 7, with coffees and teas from Lucy, the churchwarden. At Duncton Mill, our lunch spot on Day 4, we made a discovery which indicated that we were indeed following in Gilbert White’s actual footsteps. The owner of the Mill at Duncton mentioned that GW stopped at Lord’s Piece on his family’s Barlavington Estate and wrote about the Field Crickets there. At that time they were more common, but now Lord’s Piece is the last native site in the UK for the Field Cricket (although they have been
reintroduced from there back onto other heathland sites locally, and this year by the South Downs National Park).
Teas organised by The Friends made a welcome end to the days’ walking:

Our first tea in Durford Wood, and our fifth in the churchyard at Washington, where the cakes that definitely won the prizes for the whole route made their appearance, one having come from St Peter’s Marlborough. The weather was wonderful for the whole walk although there were moments towards the end when we wondered if the black clouds would hang onto their rain long enough for us to make our destination. The majesty of the Downs was enhanced by the looming rain, and from the second weekend until the end of the route we walked beneath the folded hills, sometimes topped by windmills, and always colonised by sheep and their new lambs. We ran out of large drifts of bluebells once into central Sussex, but red campions, dandelions and even early Spring orchids were in all the hedgerows, and every village was crowded with flowering shrubs, including spectacular wisteria, seen below at Amberley.

The walking was mostly relatively flat, and walkers were carried along by chat so maintained that they hardly noticed the miles; usually about 9 – 10 every day. But there was one section which was ‘challenging’ and that was Round Hill, tackled just after our lunch at Newtimber Church on Day 7. Nobody failed the test, and the view was pretty spectacular.

Finally, we reached the end of our journey, on the playing fields of Ringmer, where cricket was in progress –not for the first time on this walk. Below is the group photo, and at the bottom a photo of me in front of Ringmer Bowls Club to prove that we actually got there!

The last field before Ringmer, which when reconnoitred was full of shoulder-high maize. Some of you will know that the situation was reversed when we walked to Oxford, the recce having taken place when the maize was six inches high, and by the time we walked it in earnest, was over the tops of our heads, to the great consternation of the leader (me). Then the final group photo with walkers who didn’t seem to have noticed that they had walked ten miles that day.

Our thanks to all those who sponsored our walk, who helped to work out the route between 2016 and 2018, and to The Friends of Gilbert White and the Oates Collections who spent many hours planning, baking cakes for our teas, driving to end locations to reunite walkers with their cars and generally being wonderfully supportive. At least only one walker went to the finish rather than the start, and briefly joined the wrong group of walkers – before realising her error! Thanks are due in particular to John and Joanna Selborne, who took over the leadership of the walk and reconnoitred the whole route this spring and then led us all through the whole journey. And finally, our thanks to all those who walked the walk, without whose intense good humour and sense of fun the walk would not have given any of us half the pleasure that it did.

Your ticket for the: THE TORTOISE WALK: Leg 3