Flora Selborniensis: The mystery of the absent butterflies

Museum volunteer Debbie Vodden writes about some of observations made in our 2020 study of the Flora of Selborne based on Gilbert White's 1766 study.

In the tricentenary year of Gilbert White’s birth, we started a project to repeat the year-long document that became the Flora Selborniensis. White made regular observations of plants, particularly when they came into flower, during 1766. He also recorded what the weather was like and observed first appearances of birds, insects and a few other animals.  The record of observations is known as the Flora Selborniensis (FS). During 2020 and into 2021, similar observations are being made around Selborne, and recorded alongside those of White.

While we may envy Gilbert White the sheer variety of wildlife that appeared to be around in his time, we have the advantage of easily making a pictorial record of observations. White took great pains in appointing an artist to ensure the illustrations for the Natural History of Selborne were up to his exacting standards, as described in Richard Mabey’s biography, and of course the work has been a great inspiration to artists ever since publication in 1789. All we need do now is point a digital camera or mobile phone, and we have a picture for the record.

Garden plants, including flowering plants, feature heavily in White’s record, and here we have a pictures of plants beginning to flower in the gardens of Selborne residents. 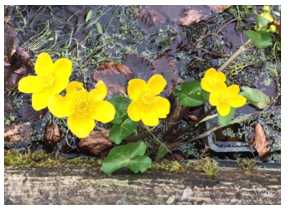 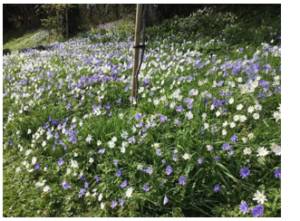 A bank of anemones recorded 2 April 2020 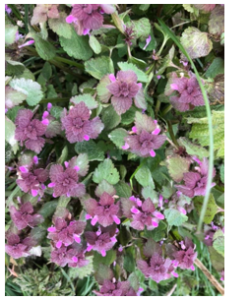 White refers to red dead nettles on 6 March in the FS and to ‘Butterfly-orchis, orchis alba bifolia minor calcari oblong, in flower’ on 13 June. With rather more patience we can achieve beautiful images of insects, like these two superb pictures taken by volunteer Chris Piper. 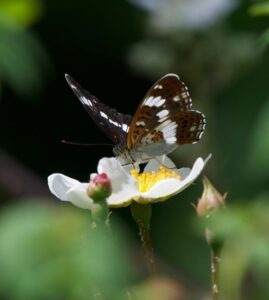 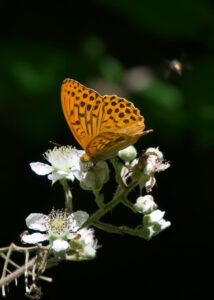 Strangely Gilbert White recorded only one observation of butterflies, ‘March 8 Saw ye first butterfly, papilio, sulphureus, a brimstone coloured one: some people saw several of these , and several that were coloured with black spots; these are, I believe, papiliones urticae’. White appears to be referring to brimstone butterflies, usually the first to appear, and small tortoiseshells. The mystery is why only one mention of butterflies in all the FS, since there must have been an abundance. Maybe they were just too common, or the snow and ice recorded late in March had depleted their numbers. Most likely, as noted by Andy Barker in a Butterfly Conservation article, Gilbert just wasn’t interested in them. White does note many other insects, including bees, beetles and grasshoppers, and seems to have a particular fascination with flies! (Flies must have been plentiful, so a great abundance was probably not the reason for ignoring butterflies.)

Birds seem to have been White’s particular interest in addition to plants. Observers at the Wakes were ‘Entertained by a lovely small group of spotted flycatchers emerging from the hanger and feeding on the insects at the top of the Ewell near the butterfly transect’ on 30 July 2020 (picture below). White notes the bird’s first appearance on 16 May. 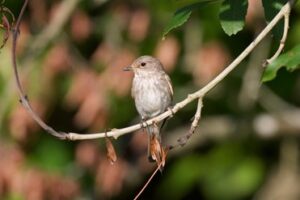 White may not have had an instant pictorial record, but he did leave us with a sound-scape of the many songs of birds. We count ourselves very fortunate to hear some he mentions such as the nightingale, nightjar, turtle dove and even the cuckoo. Other birds, thankfully, are still delighting us with their music – skylarks, yellowhammers, wrens and chiffchaffs are all mentioned in 2020/21 and one lucky person did hear a cuckoo in Selborne on 4 May 2020.

Your ticket for the: Flora Selborniensis: The mystery of the absent butterflies

Flora Selborniensis: The mystery of the absent butterflies