After cancelling our Antarctic lecture series last year due to covid-19 we were delighted to welcome all of our speakers back in 2021 this time online and reaching a much bigger and far reaching audience. 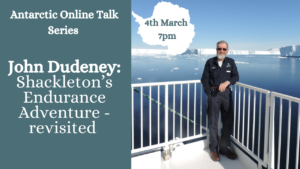 The first returning speaker was Dr John Dudeney OBE, who revisited Shackleton’s famous Endurance expedition across Antarctica in 1914. Few people could have realised at the time how appropriate the name of Shackleton’s ship would prove to be, as a succession of disasters stretched the expedition into one of the great dramas of Antarctic survival.

It is probably one of the most famous judgements ever written on the various virtues of the great heroes of the golden age of Antarctic exploration: “For scientific discovery give me Scott, for speed and efficiency of travel, give me Amundsen, but when you are in a hopeless situation, when you are seeing no way out, get down on your knees and pray for Shackleton” (Antarctic explorer and geologist Sir Raymond Priestley).

The original object was ambitious – to make the first land crossing of Antarctica via the South Pole. Almost from the start things went wrong. In the Weddell Sea, Shackleton’s ship Endurance battled its way through 1000 miles of pack ice but was trapped in ever deeper pack ice and after drifting for many months, had to be abandoned when it sank in October 2015. Shackleton now had the problem of rescuing his crew of 28 and getting them to safety.

The party set out, with the remains of Endurance’s supplies and boats on 30 October 1915 and after numerous false starts and missed targets reached Elephant Island, a deserted island at the North end of the Graham Land Peninsular. It offered food but little shelter and security from the weather. Shackleton now had to work out a way off Elephant Island to safety.

The only realistic solution, given prevailing weather patterns, was to head 800 miles across the Southern Ocean to South Georgia. The James Caird, a lifeboat from Endurance, was swiftly adapted for the voyage and on 24 April 1916 the Caird launched with Shackleton and a crew of 5 on its journey northwards.

Meanwhile, the remains of Endurance’s crew, 22 men, settled down in remarkably primitive conditions – essentially living under an upturned boat for several months – while waiting to be rescued. They were lucky enough to be under the command of Frank Wild who had been on two of Shackleton’s earlier expeditions. As Shackleton put it, “All the party owe their lives to him”.

Thanks to some pin point accurate navigation by Worsley, the James Caird sighted South Georgia on 8 May, and after a prolonged struggle with mountainous seas, the party struggled ashore at King Haakon Bay. They still had to cross the island to get to safety, and it is one of the more bizarre facts of the story that Shackleton’s team, trapped in the dark and cold at night on the top of a mountain, toboganned down the mountain around 1500 feet sitting on rolls of rope to get to safety.

Shackleton now had a team on Antarctica (his support team for the original plan) which had been stranded when their ship the Aurora had drifted out to sea, a team on Elephant Island and a small group at King Haakon Bay on South Georgia. It could be said that Shackleton did

not distinguish himself in the process of rescuing his crews. He was determined to lead the operation where possible, but those who were actually organising and paying for the rescue were less keen to have Shackleton in charge.

An inspection of British government files at the time shows a remarkable willingness on the part of the British Government to extract Shackleton from his various scrapes. It is estimated that – at a time when the UK was engaged in an all out European war of survival, Prime Minister Atlee authorised the spending of around £20 m at today’s prices to get Shackleton’s men back.

Shackleton demanded to be put in charge of these rescue missions but mostly in vain. His judgement can be questioned in some cases. The Chilean Navy offered him, free of charge, an elderly tug called the Yelcho to rescue the men on Elephant Island. Fortuitously good weather enabled the recue to be made, but Shackleton never bothered to thank the Chilean Navy for their contribution.

There is also an element of serendipity in the saga of the rescue. Shackleton was obsessed with controlling the story of what had happened – he saw this as this as his only means of getting back the large amounts invested in the expedition by his sponsors and supporters. It was almost appropriate that Shackleton’s first telegram home on arriving at the Falkland Islands managed to upstage the news of the Battle of Jutland. Given that this news was not the best the government could have wished for, Shackleton may have been doing the British Government a favour.

Shackleton’s grave on South Georgia is a place of pilgrimage for Antarctic visitors. It has on it favourite lines of Shackleton’s from the poet Browning: “I hold that a man should strive to the uttermost for his life’s set prize”. As John Dudeney concluded, sometimes even the greatest of heroes should be seen with an amount of nuance.

John Dudeney joined the British Antarctic Survey (BAS) in 1966 as young scientist, and worked for BAS in a variety of roles including Head of science division. In 2004 he was awarded the OBE for services to science. 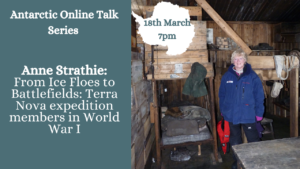 Even though Oates did not survive to serve in the war, a modern day comment about him seems to hit the mark rather well. Journalist Charles Moore, writing on the anniversary of Oates’ death in 2012, described him as the sort of man you would want beside you in the trenches - calmly carrying on and making sure the important things got done. That was what he had done without drawing attention to himself during the expedition. His eccentricities of behaviour - suggesting he could sail in his yacht down to Antarctica to join the expedition, and putting a picture of his hero Napoleon above his bed - were overlooked because of his endless willingness to support and help others in the team.
Oates even took a philosophical view on hearing the news that Amundsen was racing Scott for the Pole. “We’ve made far too much noise...if we fail it will only make us look more foolish.” It is worth noting that Scott did not for a moment think of ditching his scientific work in order to concentrate on beating Amundsen to the Pole.
Amundsen reached the Pole on 11 December 11. Scott’s team arrived about a month later, but it was to be more than a year later that Terra Nova crept into the small harbour of Oamaru in New Zealand with the news of the deaths of Scott and his colleagues.
The public reaction in Britain to the news was one of horror and pride at the sacrifices that had been made. Survivors were feted and their story entered national mythology. Around a year later several members of the Terra Nova team set sail to join Shackleton’s Endurance expedition across Antarctica. Others were happy to bask in the glory and tell their stories.
It is curious that a further demanding expedition to the South Atlantic should have been agreed as the country prepared for a global war. But Shackleton had the support of Winston Churchill at the Admiralty.
Many of the Terra Nova team were already serving RN or merchant marine personnel and rejoined as regulars or reservists. Lt Henry Remmick was the first casualty of war, losing his life when his ship was torpedoed in the Channel in September 1914. Cecil Mears, in charge of dogs with Oates, joined the cavalry and served at Ypres. His facility with languages was very useful.
Five members of the Terra Nova team served in the Dardanelles campaign. Terra Nova’s commander, Harry Pennel, was killed at The battle of Jutland when HMS Queen Mary blew up. Edward Atkinson, a Royal Navy doctor, did valuable work on parasites which saved many lives. Herbert Ponting toured Britain - and various military bases - showing his film 90 Degrees South. Over 100,000 soldiers saw the film. It was an important booster of morale: as one Army chaplain put it “we all feel we have inherited from Oates and his comrades a legacy and heritage of inestimable value in seeing through our present work.”
Oates would probably muttered something about getting the job done. 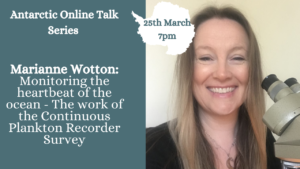 Our final lecture was from Marianne Wootton, senior analyst from the Continuous Plankton Recorders Survey. In her lecture Marianne seamlessly explained what is plankton ( diverse collection of organisms found in water (or air) that are unable to propel themselves against a current (or wind) in case you were wondering.) and how important plankton is for the worlds environment.
It is the 90th anniversary of the CPR and Marianne took us through it's fascinating history from it's inventor Sir Alistair Hardy till today. What makes it even more interesting is how Hardy's invention of an machine that could be attached to a boat and collect plankton samples is still in essence unchanged today, and how this means that the CPR has decades worth of comparable data, which can show us such things as the clear change in climate of our seas. Another interesting point was how over the decades our interests have changed in what we want o know from the data, from information for fishing purposes, to trying to understand the extent of pollution, through to questions over biodiversity in our oceans, climate change and looking towards eco-system based management of our seas.
If you missed the series we have recordings available if you are interested in viewing a recording please email info@gilbertwhiteshouse.org.uk for more information.

Your ticket for the: Online Antarctic Talks Round-up