Part 6 of our Retracing the Footsteps of Amundsen and Scott series written and researched by volunteer Anthony Fogg.

Roald Amundsen’s team (the Fram expedition) had suffered extreme cold temperatures late August 1911 following their departure for the South Pole. They had to return to Framheim and wait for conditions to improve and set off a second time on the 8th September. Robert Falcon Scott’s team (the Terra Nova expedition) had opted to wait for more stable weather conditions and were still preparing for departure as Amundsen risked being thwarted again by the extreme early Austral Spring weather.

The two expeditions took different routes to the Pole. Scott’s team laid depots with a planned route up the Beardmore glacier on to the Polar Plateau. Ernest Shackleton had discovered this route when he led the Nimrod expedition of 1907-09 where he achieved a furthest south on 9th January 1909 at a latitude of 88o 23’, less than a hundred nautical miles short of the Pole. Amundsen’s team forged a new path on to the Polar Plateau discovering the subsequently named Axel Heiberg glacier. 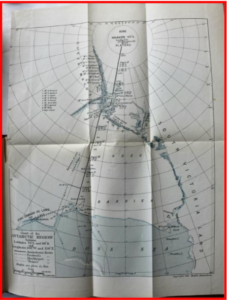 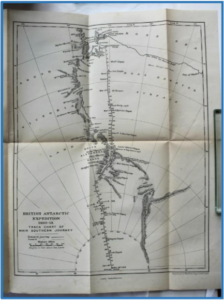 Fram: 12th September 1911: The extreme cold weather had forced Amundsen’s team to postpone their initial departure. They were now attempting to head for the Pole again. On this day the temperature was -52C with a headwind which he describes as “undeniably bitter”.

“It was easy to see that the temperature was too much for the dogs. They lay rolled up as tightly as possible, with their noses under their tails. I had to admit that with this temperature it would not pay to go on; the risk was too great. We therefore decided to drive on to the depot in 80 degrees South and unload our sledges there. On that day, too, we made the awkward discovery that the fluid in our compasses had frozen, rendering them useless. The best thing we could do, therefore, was to pitch our camp, and wait for a better state of things." 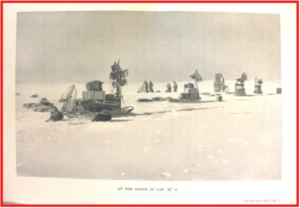 Fram: 14th September 1911: The team made it to the depot at 80 degrees South. The temperature that day was -56C. Everything there was in order, they left excess supplies, drank a cup of hot milk and started the return back to base at Framheim. Two of the team got frostbitten in their heels. The expedition was back at base by the 16th September.

Fram: 20th October 1911: The next sledging expedition to the Pole commenced with 13 dogs for each of the four sledges and on 23rd October Amundsen’s team again reached the depot at 80 deg south where they “fed our dogs richly”.

Terra Nova: Oct 1911. Scott wrote “I don’t know what to think of Amundsen’s chances. If he gets to the Pole, it must be before we do, as he is bound to travel fast with dogs and pretty certain to start early. On this account I decided at a very early date to act exactly as I should have done had he not existed. Any attempt to race must have wrecked my plan, besides which it doesn’t appear the sort of thing one is out for.”

Of Oates he wrote “The Soldier is very popular with all – a delightfully humorous cheery old pessimist – striving with the ponies night and day.” 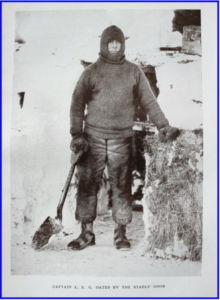 Terra Nova: 24th October 1911. The motor sledges commenced their journey across the ice barrier, but proved temperamental in their performance, particularly on ice covered in a layer of snow where the studded tracks just ground grooves in to the ice below without gaining proper traction. Scott writes “I find myself immensely eager that these tractors should succeed, even though they may not be of great help to our southern advance. A small measure of success will be enough to show their possibilities, their ability to revolutionise Polar transport.” 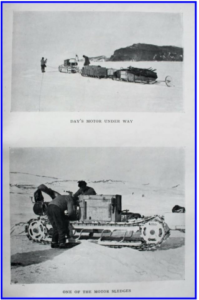 Fram: 26th October 1911: The team set off heading for the next depot 1 degree further south. The weather was fine and the surface was perfect for driving dogs and sledges. They were now building snow cairns to head height every 7-8km to assist in navigation for the return journey (see below). 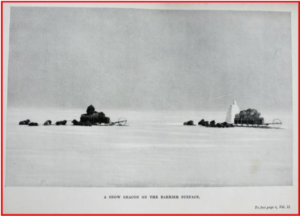 Terra Nova: 26th October 1911. Scott received a telephone call! They had rigged up a telephone line over the first stage of the route across the barrier reporting the progress, or lack of, of the motor sledges. The chains were slipping on the light snow covering on hard ice.

Terra Nova: 31st October 1911. Whilst waiting to set off Scott wrote “The future is in the lap of the gods; I can think of nothing left undone to deserve success.”

Fram: 3rd November 1911: Amundsen writes “Southerly breeze with very low driving snow. The going has been exceptionally heavy and the dogs have struggled to get the sledges forward. I have begun to use snow goggles.”

Terra Nova: 3rd November 1911. The main departure of parties from Hut Point began with several teams of men, horses and dogs and their loaded sledges heading south across the Barrier. 15 men, two motor sledges, 12 sledges, 10 ponies and 24 dogs. The motor sledges were a few days ahead of them with supplies for depoting. 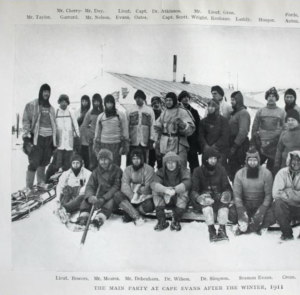 Fram: 5th November 1911: The team reached the depot at 82 degrees South. “The small (black) flags … stood out proudly against the white background. We have shown that it is possible to lay out depots on these endless plains and mark them so that with accurate navigation one can find them again”.

Terra Nova: 17th November 1911. Camp 13. Scott writes “On the whole, and considering the weights, the ponies did very well. It is early days to wonder whether the little beasts will last; one can only hope they will. Behind the pony walls it is wonderfully warm and the animals look as snug as possible.” A picture of the ponies behind the snow walls is shown below: 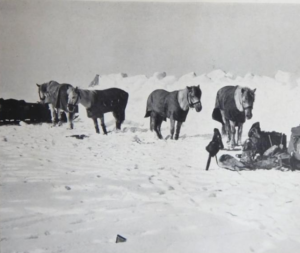 Fram: 17th November 1911: The team were at 85 degrees South near the mountain range (pictured below). 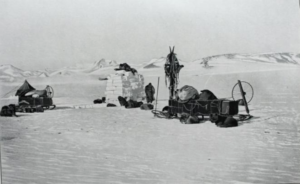 Terra Nova: 28th November 1911. The first horse was shot some 90 miles from the Glacier. There was 120lbs of forage left which was calculated to be enough to get the remaining horses to the foot of the glacier.

Terra Nova: 5th-9th December 1911. A blizzard forced the parties to camp. Losing four days. Scott writes “The ponies – head, tails, legs and all parts not protected by their rugs – are covered with ice. We have had breakfast, rebuilt the walls, and are now again in our bags. No foresight – no procedure – could have prepared us for this state of affairs.” After a march on 9th December the remaining ponies were shot. Scott wrote “Poor beasts, they have done wonderfully well considering the terrible circumstances under which they worked.” The dogs were still going well in spite of the soft surface due to recent heavy snow falls during the blizzard.

Fram: 8th December 1911: Amundsen’s team passed Shackleton’s furthest south record achieved in 1909 of 88 degrees 23 mins. They raised their pole flag on one of the sledges to commemorate the event.

Terra Nova: 11th December 1911: The dogs and their drivers are sent back to base near the foot of the Beardmore Glacier. Twelve men in three sledge teams start hauling the sledges up the glacier (a vertical climb of some 3000m). A picture of Edward Wilson sketching next to one of the tents on the glacier is shown below. 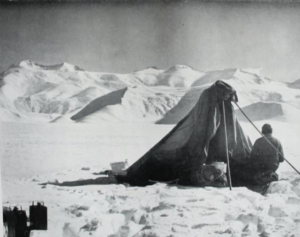 Fram: 11th December 1911: Amundsen write “Fine weather again. Little SSE breeze. -28C. Great big ring around the sun. Now lying at 88 degrees 56 minutes latitude. We can feel that it is harder to work at this height. Looking forward to coming down again to normal altitude.”

Terra Nova: 15th December 1911. Scott’s team were at 84 degrees and 8 minutes south on the Beardmore Glacier and he writes “oh for fine weather, surely we have had enough of this oppressive gloom”.

Fram: 15th December 1911: Amundsen arrived at the South Pole at 3pm with 17 dogs and 3 sledges. He writes “at last we reached our destination and planted our flag on the geographical South Pole. Of course, we are not exactly at the 90 degree point, but … very near. Tomorrow we shall go out in three directions to encircle the pole area. We had a celebration dinner, a small piece of seal meat each. We will leave here the day after tomorrow with two sledges. The third will be left here. At the same time we shall leave a small three-man tent with the Norwegian flag and a flag marked ‘Fram’." 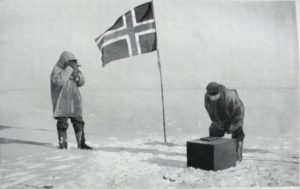 Fram: 16th December 1911: 89 degrees and 56 minutes south. The team set off on skis to go a distance of 19km in three different directions, each carrying a pole with a black flag on it. Tied to each pole was a little bag containing the position of “Polheim” (Pole Home). With further observations they were able to travel to Pole Point.

Fram: 18th December 1911: 89 degrees and 59 minutes south. 11000 feet above sea level. They set up the small tent and left within it a sextant, a hypsometer (for measuring altitude), three reindeer food bags, some reindeer fur boots and a pair of mittens. Amundsen left a letter to the King of Norway and a few words to Scott. Amundsen’s team then left from the Pole with two sledges and 16 dogs. 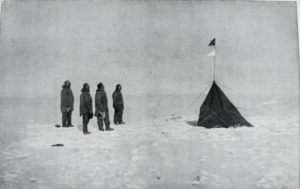 Terra Nova: 18th December 1911. Still on the glacier Scott writes “On our right we have now a pretty good view of the Adams Marshall and Wild Mountains and their very curious horizontal stratification. Wright has found, amongst other bits of wind blown debris, an undoubted bit of sandstone and a bit of black basalt. We must get to know more of the geology before leaving the glacier finally. This morning all our gear was fringed with ice crystals which looked very pretty.” Examples of rock specimens collected by the expedition can be seen at The Oates Collection (see below): 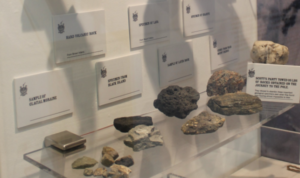 Scott was unaware that Amundsen had reached the geographical South Pole and was now heading back north to Framheim. Scott’s team was still ~300 nautical miles (345 miles, 555km) from the pole. We’ll join the teams again for one final time as they celebrate Christmas 1911, Antarctic style, and the journeys for both expeditions conclude but in tragically contrasting ways.

Your ticket for the: Retracing Scott & Amundsen’s Journey to the South Pole. Part 6