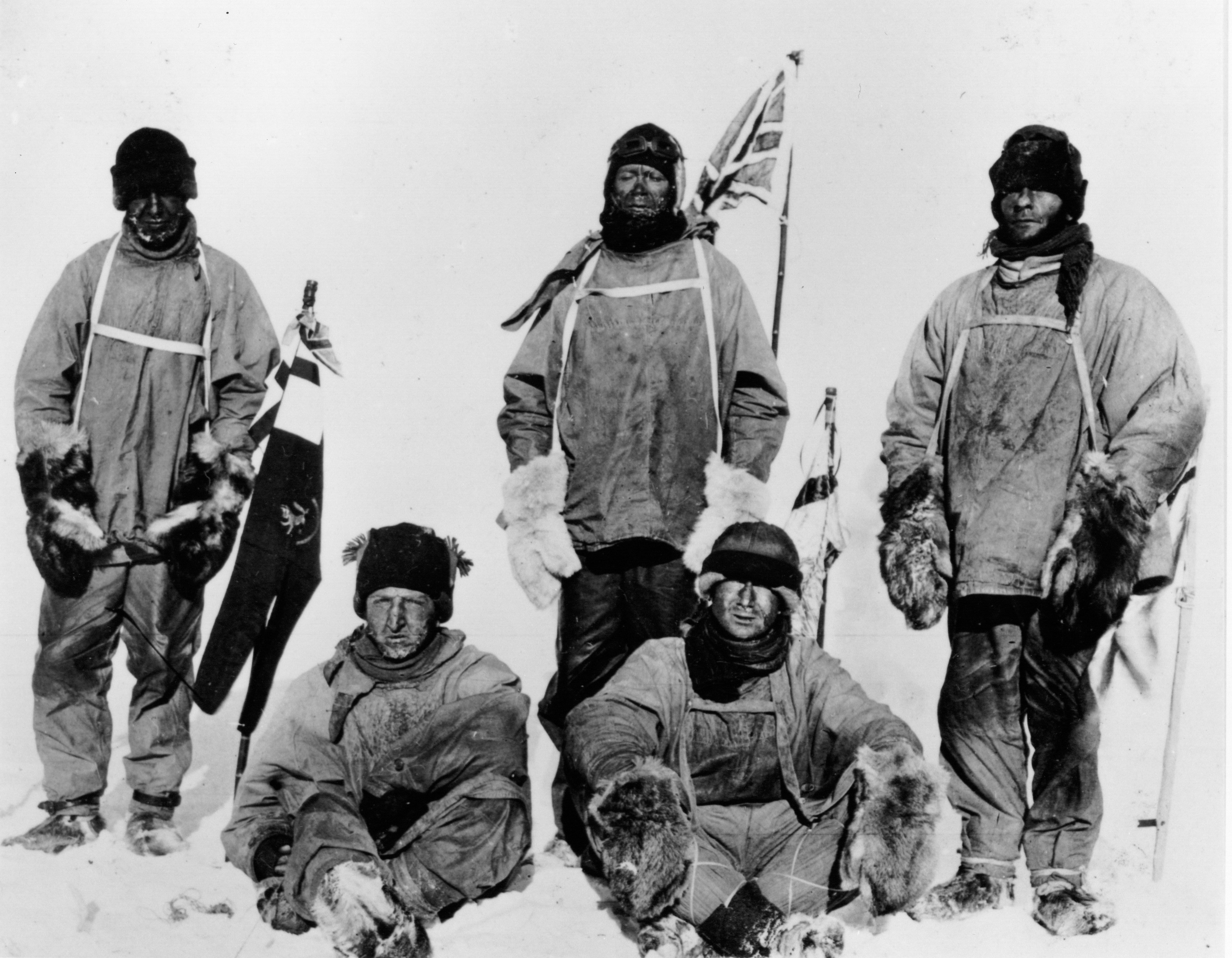 The Oates Collection exhibits focus on the lives and adventures of two members of the Oates Family, both pioneers and explorers of the natural world. Captain Lawrence Oates is best remembered as the brave Antarctic hero who was chosen to be part of Captain Robert Scott’s team to undertake the epic journey of discovery to the South Pole 1911-12. The scientific expedition became, to an extent, a race for the pole when the explorers learnt of the presence of the Norwegian team led by Amundsen. Scott’s team suffered inadequate food supplies, severe weather conditions and failing health so Oates sacrificed his life in the hope of saving his comrades, leaving the tent in a terrible blizzard with the famous last words “I am just going outside and may be some time.” His body has never been found.

To mark the 2012 centenary of the Scott Antarctic Expedition and anniversary of the death of Captain Lawrence Oates the Lawrence Oates Gallery was redesigned.  This was made possible with a Heritage Lottery Fund ‘Your Heritage’ Grant and match funding from the United Kingdom Antarctic Trust plus many other generous donations from Trusts and individuals.

The new galleries tell the story of Oates’s early life and his distinguished service in the Boer War – where he earned the nickname “No Surrender Oates” for refusing to surrender to a much superior Boer force. Most of the space in the gallery is devoted to the story of the Scott Expedition of 1910-12. The expedition was very well documented and photographed, and the new exhibition has numerous artefacts, photographs and documents – many not seen before – from the expedition. A completely new section reflects the scientific importance and legacy of the Scott Expedition: almost all climate change science originates with the work done by Scott’s scientific team.

I may be some time

Type the words ‘I am just going outside and may be some time’ into Google and you will be offered 363 million linked references. They are among the most famous recorded last words in history and are deeply embedded into the psyche of the English speaking world. Oates has become an icon of sturdy British values: a reserved person whose actions in the face of extreme circumstances transformed an up till then ordinary man into an extraordinary one. The story of Oates resonates down the years – he’s been featured in at least 4 films and plays, more than a dozen radio and TV programmes (including Dr Who), numerous works of fiction (like Terry Pratchett’s Discworld novels), and even in a poem.

If Oates had not decided, on impulse, to write from India to Captain Scott in 1909 offering his services for Scott’s forthcoming Antarctic expedition, his career would probably have only have supplied a small footnote in the history of Britain. The not very academic son of rich parents, Oates loved horses and outdoor pursuits. He seemed ideally suited to a career in the Army, but only managed to get into the regular army by transfer from the militia – part of the reserve army – following the declaration of the Boer War in 1899. Oates joined the Inniskilling Dragoons and in January 1901 arrived with his regiment in South Africa.

In March 1901 Oates and a patrol of Inniskillings were surrounded by Boers near Aberdeen. The battle continued for hours, with Oates’s men taking casualties and running out of ammunition. But when invited to surrender, Oates replied – memorably – “We came here to fight not to surrender.” Hailed as hero (‘No Surrender Oates’) he was recommended for, but not given, the VC. He was, though, severely injured by a Boer bullet which shattered his thigh.

After service in Ireland and Egypt, Oates’ regiment was sent to Mhow in India in 1908. Life was tedious – “I find Mhow a dull little place” Oates wrote home. He even imported a pack of fox hounds from Britain to make life more interesting. It was then that he read of Captain Scott’s plan for the South Pole.

The Scott Expedition of 1910-12 – of which the museum holds a very large number of artefacts, including the contents of Scott’s tent (found after his death) – can be called the first modern voyage of exploration. Scott was a showman and used the mass media to promote support for his project. He got manufacturers to sponsor goods used by the team, and was the first explorer to take a professional photographer with him – Herbert Ponting, a gifted photographer and film maker.

Although the public saw Scott’s expedition as a race against the Norwegian explorer Amundsen to reach the South Pole first – which of course Scott dearly wanted to do – it was also a very important scientific expedition. At that time, very little was known of the Antarctic, and there was no scientific data on it at all. Scott took with him eight scientists who made the first on the ground scientific measurements of Antarctica, and this data laid the basis for modern polar science and climatology. A major section of the museum’s Oates’ display records Antarctic scientific research in the footsteps of Scott up till today.

A wretched load of crocks

At the end of 1909 Oates was accepted for the expedition, the only Army man to be chosen. Scott had decided to use ponies for his dash to the South Pole, and needed a man with experience of looking after horses, hence the choice of Oates. Curiously Scott did not get Oates to choose the ponies for the expedition – when Oates finally saw them, in New Zealand, he remarked “they are very old for a job of this sort …..a wretched load of crocks.’

On 4 January 1910, after a miserable journey in heavy seas, during which Scott’s ship the Terra Nova was almost overwhelmed, the expedition arrived at Cape Evans in Antarctica. Oates’ comment was typically matter of fact ‘I can’t remember having a worse time. I was drenched all night, the water continually pouring over the forecastle in a regular torrent.’

Having built a base camp, the team set off on a trip to put in place supply deports for the march on the South Pole. Scott’s team set off on the 900 mile journey to the pole in November 1911. The route took them almost 10,000 feet up the Beardmore Glacier, followed by a long run across the open Polar Plateau to the Pole. Despite Oates’ heroic efforts, the ponies died one after the other. It was clear that dogs and manpower would have to get the team the rest of the way to the pole.

Oates was now a key member of the team. Labelled admiringly by Scott “a cheery old pessimist”, he was the one who always volunteered, the one who did more than his share of duties without complaining. It was no surprise that Scott chose Oates as a member of the five man team for the final march to the Pole.

On 17th January 1912 the team reached the South Pole, only to find that Amundsen had beaten them to it. “Now for the run home and a desperate struggle” wrote a dejected Scott. It was doubly desperate for Oates. His Boer war wound was troubling him, and his feet were in a bad way.

It was Evans who succumbed first, dying a month after the team left the Pole. Three weeks later, it was Oates’ condition that was slowing the team down. On 5th March Scott recorded in his diary “The poor soldier is nearly done”. A deterioration in the weather slowed progress to a crawl, with the temperature now down to -43 degrees F. Oates decided that his deteriorating condition was threatening the survival of his colleagues. On 17th March, Oates 32nd birthday, Scott recorded the end. “He was a brave soul. This was the end. He slept through the night before last, hoping not to wake….it was blowing a blizzard’. He said ‘I am just going outside and I may be some time’. He went out into the blizzard and we have not seen him since.”

Wilson, himself to die ten days later, wrote to Oates’ mother: “I have never seen or heard of such courage as your son has shown. He died like a man and a soldier, without a word of regret or complaint”.

Patrick Cordingley’s masterly biography says of him “Oates had lived in obscurity. When he died he became the world’s property, his name a touchstone for certain values, his death an example which thrills the imagination.” His appeal is still relevant today – a quiet man who went about his work without complaining, in appalling conditions, and who went equally quietly, but with firm determination, to a horrible death – because he hoped it might give his colleagues a chance of survival. A shipmate from Terra Nova put it very simply: “Captain Oates did just what we all expected of him, Sir. He was a fine man. Not much talk about him, but chock full of grit.”

Your ticket for the: Lawrence Oates